Founder-Acarya of the International Society for Krishna Consciousness

Born as Abhay Charan De on 1 September 1896, in Calcutta, India, A. C. Bhaktivedanta Swami Prabhupada, later known as Srila Prabhupada, was a famous leader, philosopher, scholar, teacher and saint. He left India on 13 August 1965, to reveal to the world the ancient and timeless wisdom of Vedic philosophy: a rich culture known as Krishna Consciousness, which until his departure had remained concealed within India.

Srila Prabhupada came to the West to fulfil the direct order of his spiritual master, a prominent scholar and spiritual leader, Srila Bhaktisiddhanta Sarasvati, whom he met in 1922.

Srila Prabhupada at the time was a supporter of Mahatma Gandhi, protesting for India’s need to be free from the clutches of British rule. Srila Bhaktisiddhanta Sarasvati referred to scriptural evidence to substantiate that Krishna Consciousness solely could eliminate all forms of suffering worldwide, including the violent and unjust British rule.

Therefore, he instructed Srila Prabhupada to share this transcendental philosophy in English to the Western world. Thereafter, Srila Prabhupada spent the next 32 years preparing for his journey to the West and left for America at the age of 69, with his only motive to teach people unconditional happiness, the bedrock of Krishna Consciousness 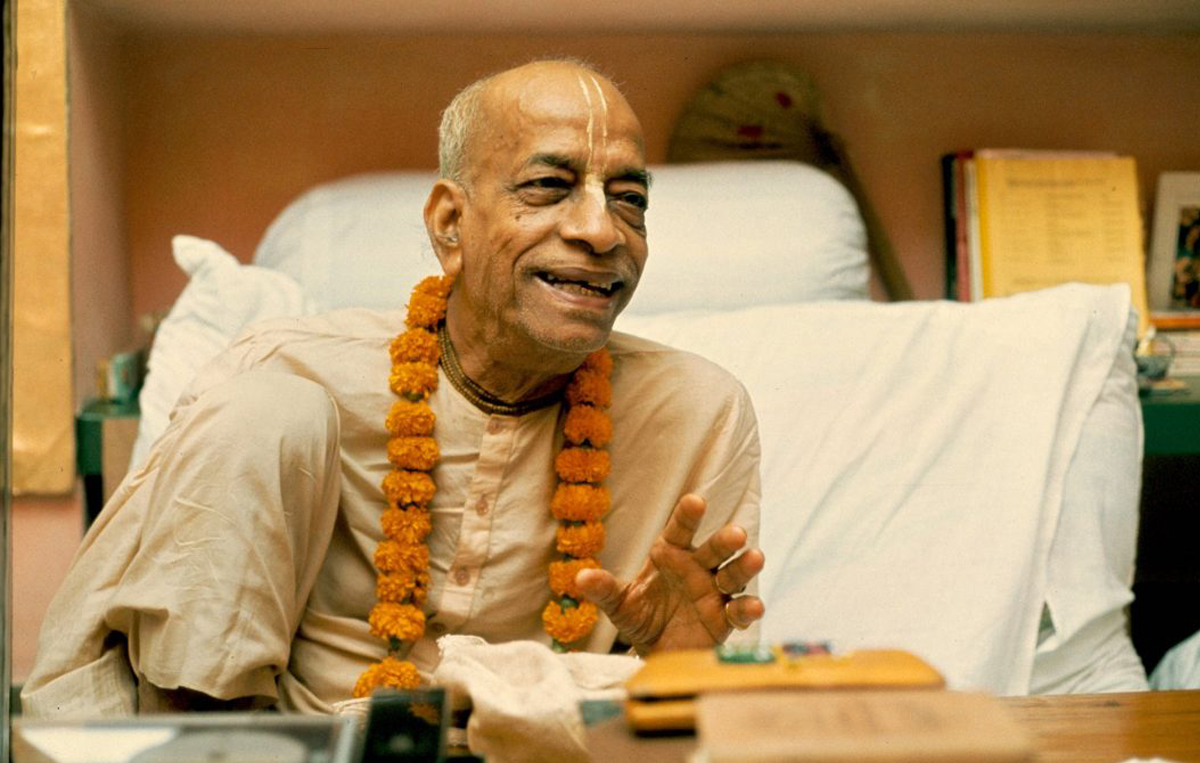 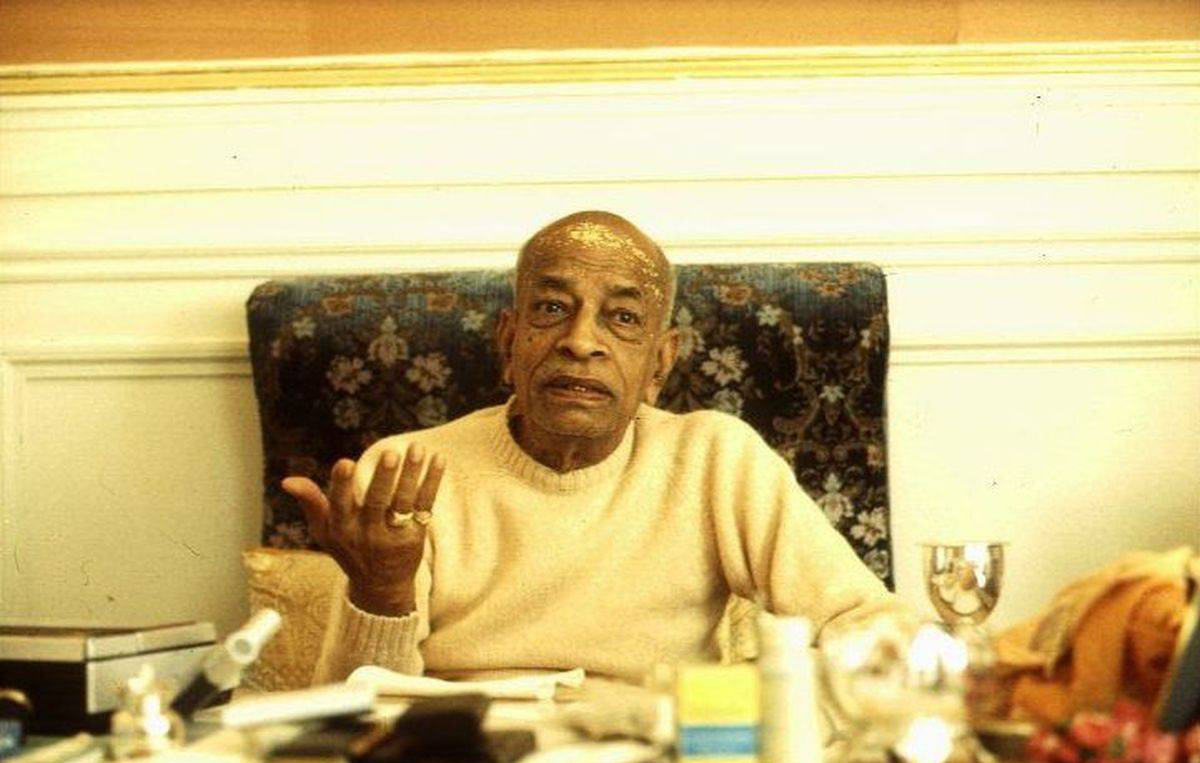 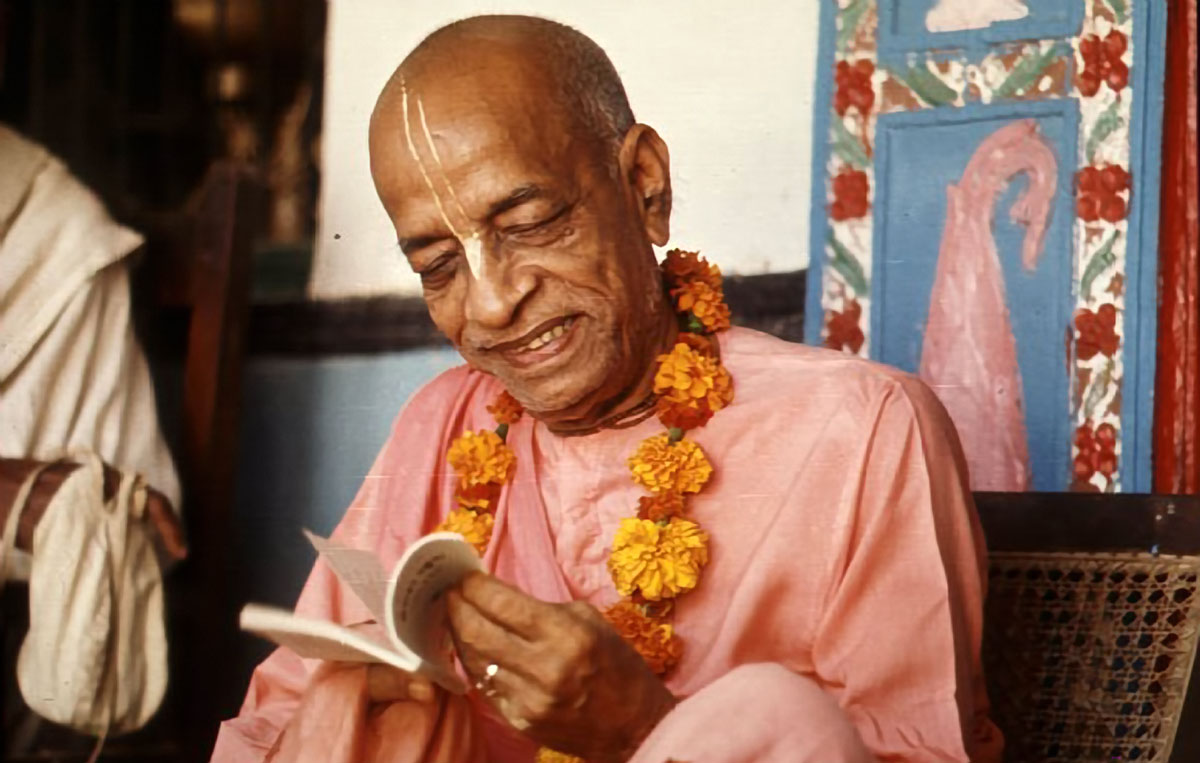 His Journey from India to the USA

Srila Prabhupada begged for passage from a local steamship company and was the only passenger on board a cargo ship named the Jaladuta. Srila Prabhupada arrived in New York thirty seven days later, alone, homeless and practically penniless. His only possessions were several trunks of sacred books, a small suitcase with a few personal items, an umbrella and seven dollars worth of Indian currency.

He was met with insurmountable obstacles and adversities. For the first year he struggled alone with no followers, no friends and not even a clear plan of how he would accomplish his worldwide preaching mission. He lived a simple lifestyle in the Bowery and began his mission by giving lectures on the Bhagavad Gita whenever he got the opportunity. He would also sing the Hare Krishna maha mantra in Tompkins Square Park and gradually began to attract some interest with young people.

In July 1966, from a small rented storefront on New York’s Lower East Side, Srila Prabhupada founded a new institution, the International Society for Krishna Consciousness (ISKCON), to deliver the realized knowledge of pure love of God to suffering humanity across the globe. His mission became enormously successful and his most invaluable contribution was his books, filled with tremendous spiritual value and a wonderful philosophy to live by. 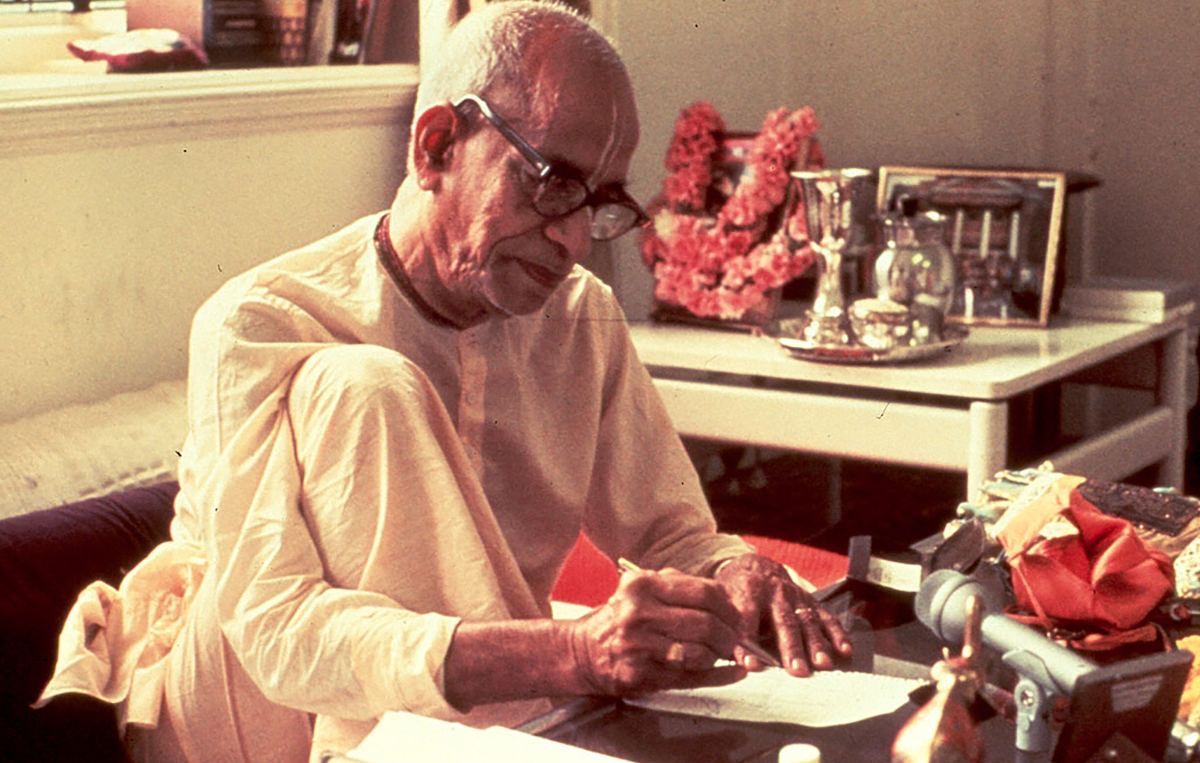 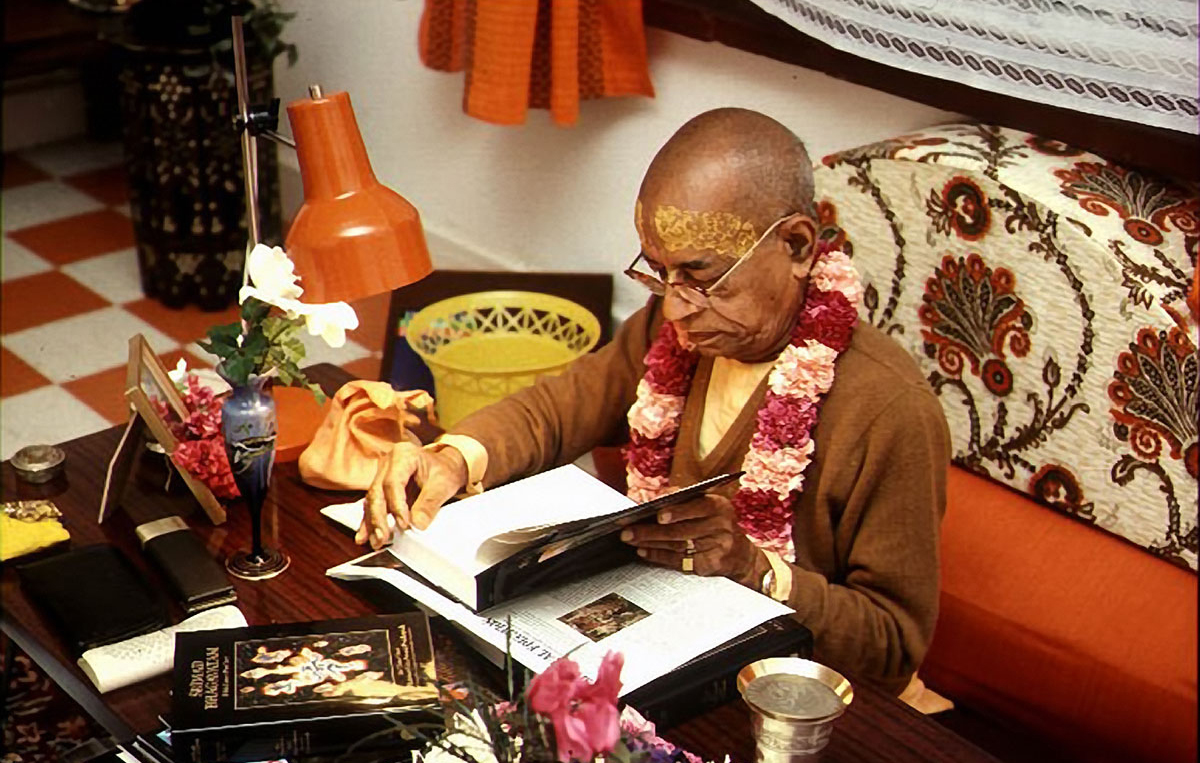 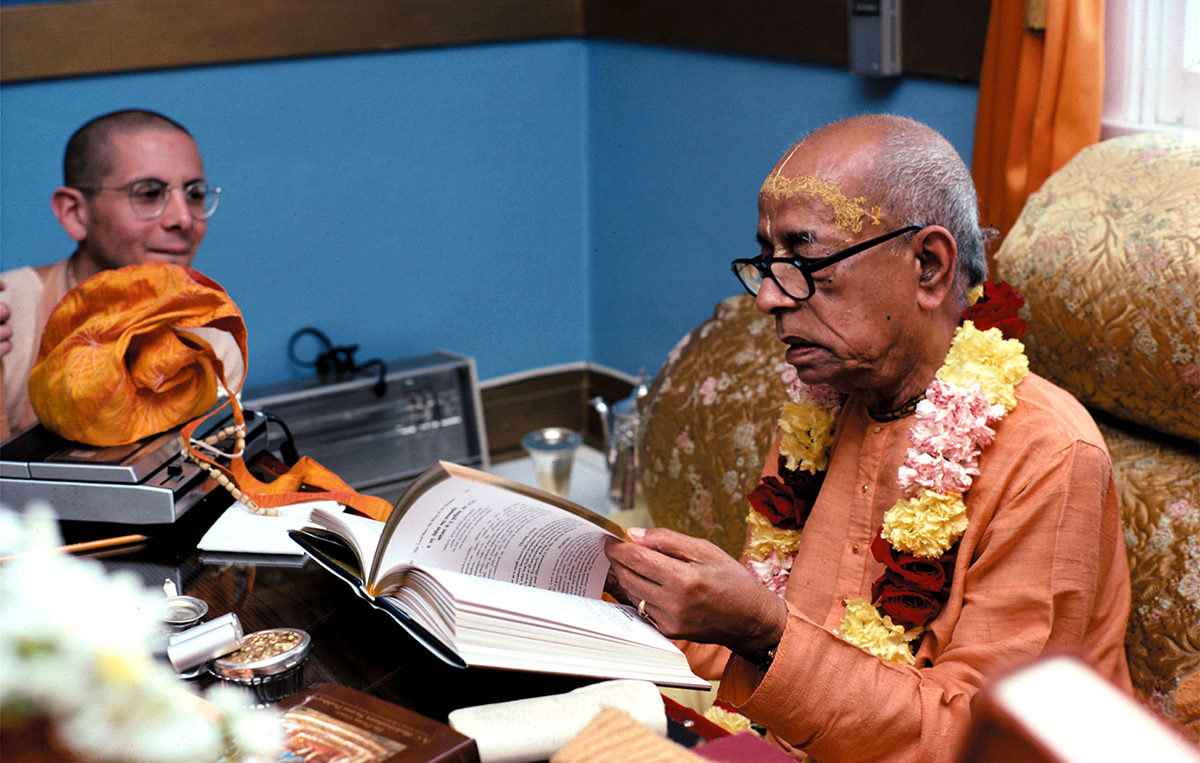 Between the years of 1965 and 1977 Srila Prabhupada translated, wrote, and published over 70 volumes of books in 87 different languages, tens of millions of which have been distributed throughout the world. His most prominent books include: the Bhagavad Gita As It Is, Srimad Bhagavatam (30 volumes) and Sri Caitanya Caritamrita (17 volumes).

During these twelve years, as well as continuing to write prolifically, Srila Prabhupada circled the globe fourteen times to spread and develop a worldwide movement. Across six continents, he had delivered thousands of lectures, wrote thousands of letters and engaged in thousands of conversations with social figures, scholars, admirers, followers and critics.

Surrounded by his disciples, Srila Prabhupada continued to translate literature until the very last days of his life. He passed away in Vrindavan, a holy place of pilgrimage, in India on 14 November 1977.